Sail Freight on the Hudson River

With two-masted schooners and sailing canal barges like the Champlain Canal schooner Lois McClure, sailing ships were once common throughout the Hudson Valley. In the days before steam power, sailboats were the easiest way to transport people and goods in the mountainous Hudson Valley and in an era where roads were bad and slow.

Today, the Schooner Apollonia, our partner on the North Hudson Voyage, is reviving sail freight on the Hudson River as a carbon-neutral, sustainable way to transport goods.

Sloops of the Hudson by Verplanck and Collier (1908). This classic is said to have inspired Pete Seeger to build the Clearwater and is in the public domain. You can read it for free online by following the title link or you can read below! 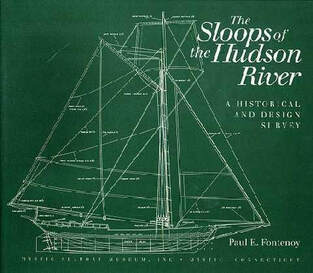 The Sloops of the Hudson River: A Historical and Design Survey ​by Paul E. Fontenoy

For more of than 200 years, sloop-rigged sailing craft carried the bulk of the commerce on the Hudson River, helping to make New York America's premier seaport. Historian and model-maker Fountenoy looks the origins of Hudson River sloops among 17th-century Dutch vessels, then traces the changes through the 18th and early 19th centuries that resulted in the classic Hudson River sloop of the 1830s-50s. He also considers the revival of the type with the 1969 sloop Clearwater.

The Hudson River Maritime Museum partnered with Mystic Seaport and Paul to produce this book and we encourage you to purchase it from Mystic Seaport.