Help tell the river's story. In 2021 and beyond, the Hudson River Maritime Museum is focusing on four primary themes for feature-length documentary films. Sponsorships will help us complete these films in a timely manner with professional film staff.
Hudson River Lighthouses Series 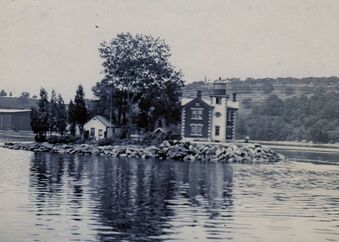 The Hudson River has had lighthouses since the 1820s. This film series will examine the histories of 8 lighthouses: Hudson-Athens, Saugerties, Rondout, Esopus Meadows, Stony Point, Tarrytown, Jeffrey's Hook, and Robbin's Reef. Each lighthouse will have its own episode, bracketed by introduction and conclusion episodes to create the ten episode film series. Featuring modern interviews with historians, lighthouse experts, and caretakers, historic images, and stunning footage.

Production of the lighthouse films begins in the spring of 2021.

Sponsorships for individual film episodes are available to businesses and individuals for Executive Producer credit, among other benefits. For full benefits, please download the sponsorship form below. We also welcome individual donations of any amount to help support the creation of these engaging films. 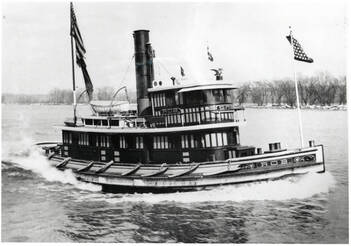 The Hudson River was once home to some of the biggest towing companies on the eastern seaboard and tugboats and barges can still be seen plying its waters today. Help us teach the public about the history and future of towing on the Hudson River.
​RiverWise Film Series Sponsorship Levels:
Sponsor a Film or Film Series
Want to sponsor a different topic? We are planning to tackle more topics on future trips, including industrial, environmental, and social history. Contact Lisa Cline at lcline@hrmm.org or 845-338-0071 for more information.

Located on the historic Rondout waterfront, the Hudson River Maritime Museum was established in 1979 and is dedicated to the preservation and interpretation of the maritime history of the Hudson River, its tributaries, and related industries.

RiverWise is a project of the Hudson River Maritime Museum to bring the river closer to you.

Support the museum with a donation or become a member! The museum is a 501(c)3 nonprofit organization that relies on memberships and individual donations.